Roly moves to the Neuendorf training camp in Fürstenwalde.

“In this area in Nauendorf between 1940 and 1943 there was an agricultural camp of Jews who hoped to emigrate the Fascist terror zone from which they suffered for a long time.

But in fact, here in 1942, part of the Final Solution took place as an answer to the “Jewish Question” and from there they were deported to the death camps … “

In 1941, the Nazis began closing all the Hachshara training camps throughout Germany and concentrating their inmates in one camp. Four adults instructors were left in the Ahrensdorf camp, who had to paint the walls and return the camp to its previous state, because a lease contract had to be kept.

Rolli, in the alumni group, moved to the Algot training camp, we have almost no details at the moment about that camp.

On July 1, 1941, Rolli moves to the camp in Nauendorf. At this stage, the camp was no longer a training camp but a forced labor camp.

In the 1920s, the main building, known as the “Palace”, acquired a Jewish family until the Nazis came to power. The family fled to the United States and left the building and the surrounding areas to Jews living in the area. At first, there were those who were called the “non-Zionists” (the nickname given to them by the members of the Hachshara that followed). They were Jews with professions such as lawyers and accountants who, because they were forbidden to work in these professions in Germany, had no intention or vision to immigrate to the land of Israel. They wanted to run away wherever possible.

At a certain stage, the Nazis liquidate all the training camps throughout Germany and centralize the youth Hachshara people in Nauendorf.

At this point, the Jews had already begun to gather in the concentration camps, the “Jewish problem” would have to be solved. The conditions are getting worst and the training staff were held as prisoners of war. 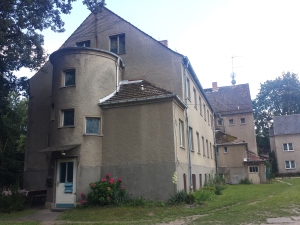 The back side of the “palace” 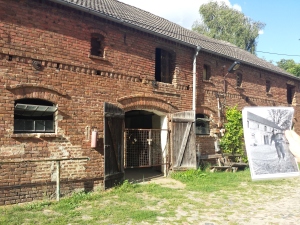 The “palace” – here lived the couples. 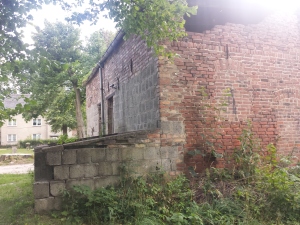 Esther Bejerano, who was with Rolli in both Ahrensdorf and Neuendorf, said that at first they really did not know what was going on outside, but in Neuendorf it was already clear to them where all this was going to. But then it was too late.

Apart from the work for the camp’s residents, the members had to work in various jobs for the residents and factories of the area. One of the apprentices who worked in a flower shop, for example, was known for writing a beautiful hand. She wrote the business cards. Most of the members were less fortunate. Eli Heiman, for example, says that he had to walk four kilometers in the morning, and the same back in a hard labor work.

In Nauendorf, a group of religious training camps (Agudat Israel) were also stationed, and at first they lived separately a few hundred meters from the camp, but at a certain point the Gestapo forced them to live in the camp and were housed in a separate building.

They thought they were moving to another training camp, but when they reached Neandorf they understood what was planned for them.

According to one source, Rolli had already received permission to immigrate to Palestina but decided to remain in the training camp in order to educate other groups of young people who would immigrate to Palestina. We learn from this, and from the letter he sent to his sister in Hamburg that he did not see what was to come, and perhaps from the “bubble” in which the camp residents lived, it was impossible to see the reality as it was, for example, seen by Hamburg’s Jewish citizens.

According to another source, Rolli never received the permit, mainly because he was single and because the Jewish settlement in Palestina at that time preferred couples.

At first, Rolli lived in the single’s quarters, the “huts”, as Hilda Simcha had called. After his wedding with Wally Hirschfeld, he moved to the couples’ quarters.

Rolli receives the news that the family was deported from Hamburg to Minsk while being in Neuendorf.

In 1941, the last of the camp’s members were transferred to Berlin before being sent to Auschwitz. They passed the the responsibility for the camp’s buildings to a Swiss guy who had long been trusted by them/

According to the story of the townspeople, one night after the end of the war, the man set fire to the main building, the “palace” and fled to Switzerland. He committed suicide a few months later and the truth is not known. It is not certain that he was the one who set fire to the place or as one of the people hinted to us – that the villagers did not want the Jews to return there.

The burned structure was then restored, but it was no longer as it had been before the fire. This is no longer a “palace”.

Today the area of ​​the camp is owned by a BIMA – a German government company , and some of its buildings are inhabited by residents of a social housing that had been there since the Communist occupation.

Edit 2018: The building is sold to a group of people, and we are doing everything we can to make sure that they will preserve the place. The camp got a significant part of the youth Zionist movement, and its destruction would be a historical hazard. More to read in the following post: “save Neuendorf: future for the history of the Hachshara movement in Germany”

Toda the following sign there describes the camp’s past:

In this area in Neuendorf between 1940 and 1943, existed an agricultural camp of Jews hoped to emigrate from the area of ​​fascist terror from which they suffered for a long time.

But in fact, here in 1942, part of the Final Solution took place as an answer to the “Jewish Question” and from there was deported to the death camps. The last shipment from Neuendorf was in April 1943, when a group of children including the teacher Clara Grunewald were sent to the Auschwitz gas chambers. 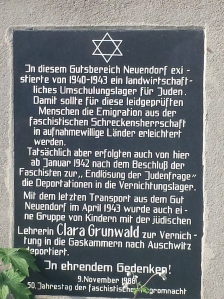 Klara Gruenwald was the initiator of a special education system (Montessori) that to this day is considered very advanced, it is used is several schools in Germany.

* Many thanks to Hilda Simcha and Nachum Pur for their extensive information about the camp, thanks to Mimi Swalski and Rudiger Folman, my friends and “camps hunters” *

This site uses Akismet to reduce spam. Learn how your comment data is processed.